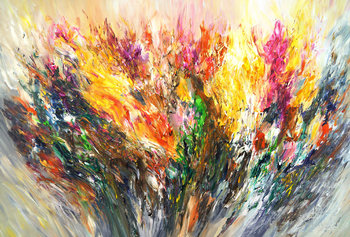 Imagine “Life” being a big, white, empty canvas. Each of us resembles a paint brush. By that, we are meant to leave a mark. It could be a gigantic one or a slim dot, both hold the same value. Imagine “Mona Lisa” without the small dots that filled her eyes?! There is no “right” or “wrong” collor. “Better” or “Worse”. “Good” or “Evil”. Each collor it’s there to be used – sometimes more often, sometimes less. Sometimes with a purpose, sometimes without. Its impossible to understand the “bigger” picture that we, as a unit, draw. So why worry about it? Thousands of brushes could be drawing the same things and you could be that ONE, that gives a new direction. Never forget that but also never grasp on the idea. Just draw whatever comes from inside you – it would never be a mistake.